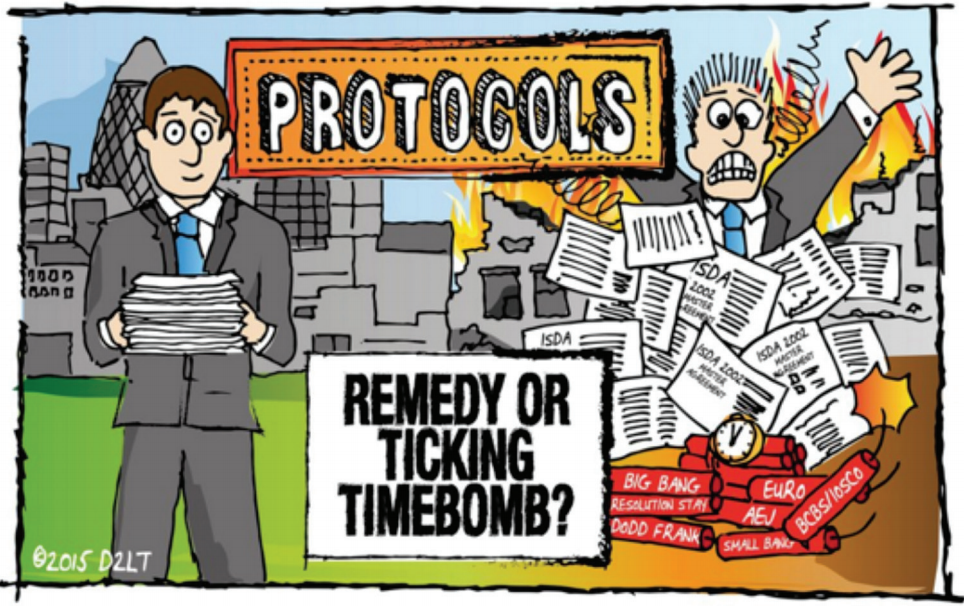 The use of protocols has become standard practice over the past couple of decades  to  enable financial firms to quickly change large volumes of contractual documents in order to meet regulatory timelines and respond swiftly to market events, with over 50 protocols created to  deal  with  the changes to regulations and legislation over the past 17 years. Clearly this is a powerful model but the level of complexity has increased significantly since the introduction of the European Monetary Union (EMU) protocol. As the industry waits for the extension of  the extremely  complex  Resolution  Stay (Living Wills) protocol and anticipated introduction of a BCBS-­‐IOSCO related protocol, Akber Datoo, founder and managing partner of D2 Legal Technology, calls on financial institutions and regulators -­‐who now also appear to consider protocols to be a panacea for all -­‐to consider the underlying risk before it is too late.

Since International Swaps and Derivatives Association’s (ISDA) creation of the European Monetary Union (EMU) protocol when  the  single  European  currency  was  first  introduced,  this  methodology has become the go-­‐to mechanism to enable financial institutions and their counterparties to amend affected contracts without the need to trawl through and renegotiate every single document.

However, during the past 17 years these protocols have become significantly more complex. Whilst admittedly in response to increasingly intricate and un-­‐coordinated regulation from different regulators, this complexity has created a  strong  risk  that  organisations  no  longer  know  or understand the ultimate impact of the protocol and the contract terms in place with a counterparty. The BCBS-­‐IOSCO protocol, for example, puts in place new documentation  annexes  with  a counterparty and affects some very significant commercial terms in areas of increasing regulatory scrutiny, such as the use and segregation of client assets/money, raising the chance of unintended business consequences, large operational losses or regulatory fines.

In effect, this reliance – or over-­‐reliance – on protocols may assist the contract negotiation task required by regulatory or other market events but, in the process, is simply deferring the task of understanding the changes needed to the documentation with their counterparty and creating  a massive legal data problem.

Despite the growing reliance on protocols,  in a survey of  17 banks undertaken in 2013, just one institution had robust processes in place to adequately handle protocol adherence from a legal data perspective – and there is little sign that the situation has improved since then. How does an organisation know if a counterparty has adhered to a specific protocol?   Right now, the only option is to routinely check the ISDA website – something that few financial institutions appear to undertake. The reality is that there is no audit trail, no process for checking and storing counterparty adherence elections – or instances where adherence is revoked.

Critically, few organisations are even considering the downstream implication of specific protocol adherence.   Despite the belated introduction of systems and processes around legal contract data, most banks are still failing to take into account the implications of these protocols and hence have no understanding of the impact of adherence on a contract for the people and systems that use this information on a daily basis. As a result, this critical legal data can be left in a highly uncertain state. One only needs to consider the irony of the ISDA 2014 Collateral Agreement Negative Interest Protocol, which only automatically amends the terms of an agreement if it doesn’t contain a “Protocol Excluded Modifying Provision”. But of course few firms can automatically determine whether that is the case without manually reviewing their agreements (which they have for the most part, failed to do).

There is a time and a place for protocols. However, the reality is that over-­‐reliance on protocols has created a weapon of mass data destruction. As the Resolution Stay protocol is broadened to the wider market and the BCBS-­‐IOSCO protocol is introduced there is a very real risk that unless banks and regulators alike reconsider the true implications of this model the industry will, once again, find itself in the spotlight for a major financial failure.